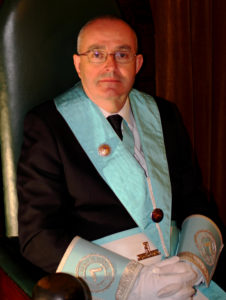 Christopher Powell was born at Lyme Regis, Dorset and educated at the universities of Sheffield and Cambridge (Emmanuel College). He taught in the University of Cambridge for five years before moving to Cardiff where for twenty-five years he was on the staff of the Royal Welsh College of Music and Drama – the National Conservatoire of Wales. He held a number of senior academic and administrative posts and was for more than a decade a member of the academic board and governing body of the college.

Having retired on his fiftieth birthday – his present to himself – he became a Freemason first in the Province of Derbyshire and then in Yorkshire West Riding. He is a Past Master of Royal Brunswick Lodge No.296 and a Past Z of Chapter of Loyalty No. 296, both eighteenth-century foundations based in Sheffield. He is also a member of other Masonic bodies in England and Scotland. In 2009, he was awarded the Norman B. Spencer Prize and the following year elected a full member of QC lodge. He is the author of numerous papers published in AQC as well as papers in other Masonic journals, including those of the Manchester and Bristol Masonic research associations.

For the last ten years Chris has been a plenary lecturer at the East Lancashire ‘Let’s Talk Masonry’ annual conference. He is also the author of Easy Lodge Music – a collection of familiar music for lodge use.