The Legend of the Quatuor Coronati

QC takes its name from the Four Crowned Martyrs or ‘Quatuor Coronati’ – the traditional patron saints of stonemasons, and the building trades more generally, who were venerated in medieval times. ‘Coronati’ is translated as ‘crowned ones’, and refers to their martyrdom. 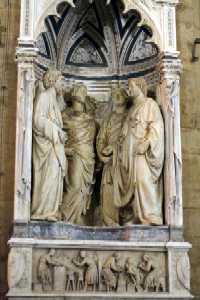 The legend of the Quatuor Coronati is interesting from the standpoint of Masonic research partly because of its inclusion in the Arundel MS, one of the earliest surviving documents that details the legendary foundation of the masons’ craft. The legend is also emblematic of Masonic research in that what at first appears straightforward becomes more complex on detailed analysis as contradictions and uncertainties are revealed.

Told at its simplest, the story refers to four stone masons who were asked to carve the image of Æsculapius for Emperor Diocletian but refused because as Christian converts they were forbidden to produce an image of a pagan god. Diocletian consequently ordered their execution. The legend takes a variety of contradictory forms. The Arundel legend is taken from a 12th century MS in the British Museum: Ar: MSS, 91, f. 2186. Other versions include the Harleian MS, No. 2802, f 99, and the Regius MS, 8, c, 7 f 165.